“Discovery” means all the evidence that the prosecutor turns over to the Defense.  In Texas, they do not have to only turn over exculpatory material.  They have to turn over almost everything they have (with a few exceptions).  In DWI cases, the discovery usually consists of three main components.  The Offense Report, video – dashcam and bodycam, and blood or breath analysis.  The combination of these elements will have a lot to say about whether a case is strong or weak for the prosecution.

This report prepared by the arresting officer will have a narrative of what occurred from the officer’s prospective.  This will typically include the initial stop, personal contact with the DWI suspect, and the DWI investigation and any other pertinent details.

The Offense Report is usually written in such a way as to support the prosecution.  It is important to cross-check the report with the other evidence in the case, such as the dashcam video.

This video, along with the BAC test if it exists, is the most important piece of evidence in most DWI cases.  The video will usually begin a few seconds to minutes before the stop and will continue through the DWI investigation and arrest.

It will be shown to the jury in all trials, so when watching the videos, it’s important to keep in mind what the average person would think when watching.  Does the person seem drunk?  Are they rude?  Do they have trouble keeping balance?  Are they slurring their speech?  How was their driving?  Did they swerve between lanes?  Did they lead the police on a little chase before pulling over?

And this can work in the driver’s favor as well.  Does the dashcam actually show the initial violation that caused the stop to be initiated?  If not, then why not? Was the officer rude in conducting the investigation?  Did the investigation follow procedure?  Does the officer’s report exaggerate the clues from the Field Sobriety Tests?  The answers to these questions, in totality, will help shape your case and help you determine  whether it is a strong or weak case for the prosecutor.

Police can test your BAC with either a breathalyzer of a blood draw.  A BAC over .08 means you are legally intoxicated.  (Keep in mind, a reading below .08 does not absolve you automatically – police can still prove intoxication in other ways.)  A BAC over .15 bumps the severity of the DWI from a class B to class A misdemeanor, with bigger potential fines and penalties.

The officer on scene conducting the DWI investigation will request that you blow into a breathalyzer.  If you have had any alcohol that day, you should not blow, even if you feel you are not drunk.  Most people don’t realize that .08 is a very low bar.  Additionally, the test might not be accurate.  For example, if you just finished a drink the test could show a BAC above .08 because of the alcohol in your mouth, rather than the amount in your blood stream (despite claims that this sort of false positive does not happen).

If you refuse, you might still be arrested.  However, it is usually better not to give this type of evidence to the prosecutor.  The officer might decide to approach a judge for a blood draw warrant.  If they do this, a phlebotomist will draw your blood – usually in a room at the jail.  A sample of the blood will be sent to the lab and tested.  This process takes months, during which time your case will usually remain pending.

Sometimes, either due to lack of resources or laziness, the officers will not request a warrant, and will not get a blood sample even when a breathalyzer was refused.  In these cases, prosecutors must go forward on the video and officer’s testimony alone.  These cases are typically weaker, and prosecutors are more likely to offer a good plea or dismiss.

Sometimes there will also be 911 calls from people reporting bad driving.  These can be damaging because they come from people with “no dog in the fight”.  Maybe there is damage on the car that seems fresh.  Perhaps there are receipts showing the purchase of alcohol earlier in the night.  Every case is different, so there may be additional evidence that doesn’t fit into the above categories, but still does have a bearing on your DWI.  The discovery material determines the strength of the case, which in turn has a direct effect on plea negotiations.

If the police did not follow the law, the way to challenge it is to file a motion to suppress.  This does not get the case thrown out, but it can exclude key evidence which will sometimes have the same effect of ending the case with dismissal.

Once you file a motion to suppress, you can set the motion for a hearing.  In the case of a warrantless arrest (which is the case with most DWIs), the prosecutor has the burden of proving that the stop was legal.  This means it is their job to subpoena the officer, or anyone else who they need to prove that the stop was legal.  If they cannot locate the officer or to bring them to court, the motion to suppress evidence will typically succeed.

The possible issues at a motion to suppress hearing are numerous.  Maybe the officer says you were speeding when you were not.  Maybe there was evidence for the stop, but not enough evidence to begin a DWI investigation.  In one case, I discovered that the Kyle Police Department included no procedures for inventory of a vehicle.  Therefore, when they discovered contraband as part of an inventory search, they did not follow their own procedure and therefore the evidence had to be thrown out.

A motion to Suppress can end the case in a dismissal.  It can also play a part in plea negotiations.  Sometimes, if you agree to give up your suppression hearing, you can get favorable terms for your plea.  Every case is different, but a Motion to Suppress Evidence will play a key role in many DWIs. 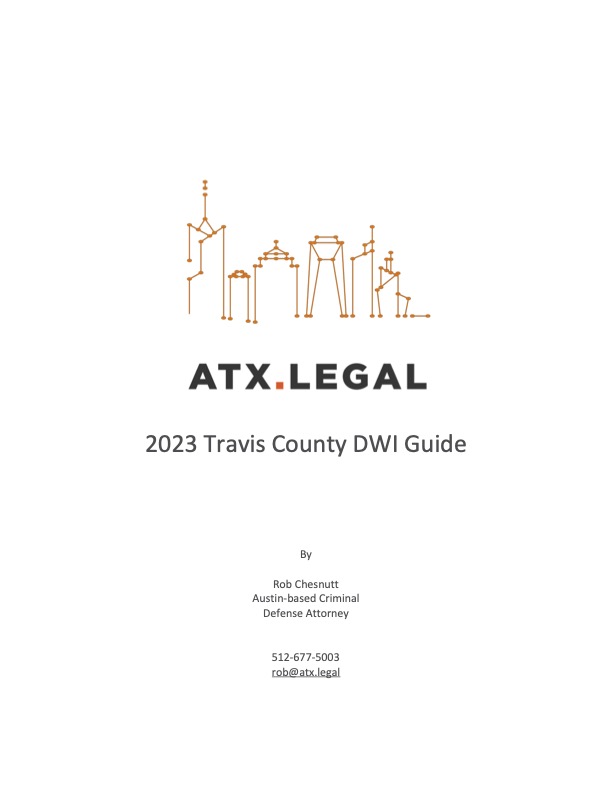